How to Make a Macrame Plant Hanger: Easy DIY Tutorial

How to Make a Macrame Plant Hanger

If you’ve wanted to make your own macrame plant holder, you’re in the right spot! This easy macramé plant hanger pattern is made with just a few simple knotting techniques – so it’s perfect for macrame beginners. After following this tutorial, you’ll have an original piece of home decor that’s one-of-a-kind!

Macrame is a decorative knotting craft that anyone can do with just a little bit of practice! It’s is a great way to create beautiful and functional pieces of art – like wall hangings, plant hangers, curtains, and more.

Macrame has been popular in many time periods, from Arabic weavers in the 13th century, to the Victorian era, to the 1970s. So, it’s no surprise that macrame plant hanger projects are on-trend once again.

Macramé has a reputation of being difficult to do, but it’s really not that hard to get started. You don’t need a lot of special tools, just some cotton cord and a willingness to learn.

After that, you’re ready to learn how to macrame. Start by practicing the basic macrame knots. Did you know, even the most complicated macrame projects are made of the same simple knots? (You may even recognize some of the knots from making friendship bracelets.)

For this simple plant hanger, we’ll be creating the design with basic knots only. For a different look, you could add wooden beads in between some of the knots.

You can use all sorts of rope to make macrame. Cords come in different sizes and materials, including cotton, linen, hemp, jute, leather, or wool.

For macramé plant hangers, I prefer to use cotton rope – specifically this 4mm 4-ply cotton cord.

I like using cotton rope because it is soft, flexible, and widely available. It’s easy to tie, and it won’t stretch out over time. You can find macrame cord online or at most craft stores.

If you can’t find cotton cord, you can use other materials like hemp, jute, or polypropylene rope. (Poly rope is a good choice if you will be hanging your planter outside.)

Before we get started, let’s go over a few macrame terms that you’ll need to know for this tutorial.

I designed this easy plant hanger pattern with simple knots – so it’s a great first pattern for beginners.

Here are the knots you’ll need to know to make this macrame hanging planter.

For more information about how to learn macrame for beginners, check out this comprehensive guide: How to Macrame.

The first thing to do is to set up your macrame workspace.

You can start making this macrame planter on a flat work surface, like a countertop or dining room table. Use masking tape to secure the starting loop while you tie the first knots.

Once you’ve tied the first few inches of knots, it will be much easier to work vertically. You can hang the planter from a coat hook, a doorknob, or a clothes rack.

Measure and Cut the Cords

Here’s how much cord you’ll need to make a hanging planter with a finished measurement of 36″.

After I cut the cords, I like to wrap the ends with a bit of masking tape to keep them from unraveling.

Start the Hanger with Ring or Loop

There are a few ways to start a macrame plant hanger. Here are two simple methods.

Start with a ring:

Start with a loop:

How to Tie a Vertical Lark’s Head Knot

The Vertical Lark’s Head Knot is made by tying two half hitches.

Make a Round of Square Knots

Divide the twelve cords into three groups of 4. You will be working with one group at a time. If you were to number the cords in each group from left to right, Cords 1 and 4 would be the working cords. Cords 2 and 3 would be the filler (inner) cords.

Set the other two groups aside while you tie knots with the first group.

With the first group, tie a sequence (aka a sinnet) or 5 square knots. Repeat with the other two groups of cords.

This square knot section should be 2″ long.

How to Tie a Square Knot

A square knot is made from two half square knots, worked one after the other.

To tie a square knot:

Make a Round of Spiral Knots

Move down 6 inches. With the first group, work a sequence of 20 half-square knots.  As you tie the half square knots, the cords will spiral to the right.  (This knotting technique is also called Spiral Stitch, or Half Square Knot Spiral. )

How to Tie a Half-Square Knot

Repeat with each of the other two groups.

This spiral knot section should be 4″ long.

Make the Second Round of Square Knots

Move down 6 inches. Tie a sequence of 5 square knots. Repeat with each of the other two groups.

This square knot section should be 2″ long.

Now we’ll move on to the basket or “cradle” section at the bottom of the plant hanger. For this section, we’ll be making three rounds of alternating square knots.

Round 1: Move down 2 inches, and work a round of alternating square knots.

How to Make Alternating Square Knots

Round 2: Move down 2 inches (measured diagonally), and work another round of alternating square knots.

Round 3: Move down another 2 inches (measured diagonally), and work the third round of alternating square knots.

Now we’ll make one last section of knots to tie everything together.

Remove the pot from the planter. Measure the radius of the pot (or the distance from the bottom edge to the center point. For my pot, the radius was 1.5″.

Move down this distance. Using the two longest cords, make a spiral of 10 half square knots around all of the remaining cords.

Trim the ends of all cords 6-8″ below the last knot. If you want, you can add a small dab of glue to the final knot for extra security.

Then, you can make fringe. Start by unraveling the cords with your fingers. Then, you can brush the ends with a wire brush to create a finer, fluffier fringe.

Now that the plant hanger is finished, it’s time to hang it up. You can hang your planter from the ceiling with a ceiling hook. Or, hang the planter on a wall-mounted plant hook.

Here are some tips for hanging plants:

Here are a few easy-to-care-for plants that are perfect for hanging planters.

How to Water Hanging Plants

Watering indoor hanging plants can be tricky since you don’t want water to drip all over your floor. In general, I prefer to remove the pot from the hanger and give the plant a good watering in the sink. I keep the pot in the sink for about 30 minutes to allow any excess water to drain. Then, I dry off the pot and place it back in the hanger.

If you want to learn more about macrame, here are a few free tutorials you may like.

Pin this post: Save this tutorial to your Pinterest boards so that you can come back to it later.

Leave a comment: I love to hear your feedback. Tell me in the comments below!

I hope this tutorial was useful for you! If you have any additional questions, feel free to join my Facebook Group. I created this group for you to share your pictures, WIPs, ask questions, and help each other out.

As an Amazon Associate and member of other affiliate programs, I earn from qualifying purchases.

Did you make this project?

Sarah Stearns is an artist, maker, and blogger at sarahmaker.com

Her work has been featured in Scientific American, Good Housekeeping, Vox, Apartment Therapy, and more.

Sarah lives and works in North Carolina with her husband and young kids. 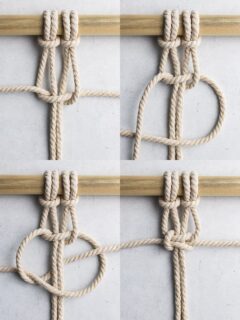 Previous
How to Macrame: Get Started with this Easy Beginner's Guide 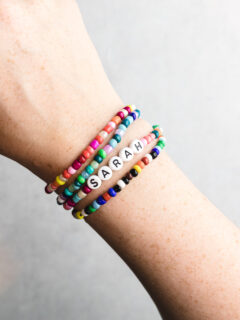 Next
How to Make Stretchy Beaded Bracelets with Elastic Cord
Click here to cancel reply.

I can’t wait to share my project ideas with you. Be sure to stick around for crafts, DIYs, and other fun projects.